Eric Lippert is one of my favorite Microsoft bloggers. He's one of those people who reminds you that Microsoft, despite all its problems, still employs a lot of incredibly thoughtful, near-genius programmers. Take a look at his greatest hits:

Jeff your assuming I want you to think for me.

Here’s a bookmarklet that I use. It doesn’t work good on Jeff’s blog (text is still dark gray), but it helps on a lot of other sites. Feel free to adapt it (as I’m too lazy), if the blog comment engine doesn’t chew it to pieces.

Sounds to me like you need the Gresemonkey plugin for Firefox:
https://addons.mozilla.org/firefox/748/

Man, I get so sick of typing orange, maybe one of your readers could write a greasemonkey script that inserts it for me

Anyways, all this talk about font-color/contrast/size reminds me of this excellent post 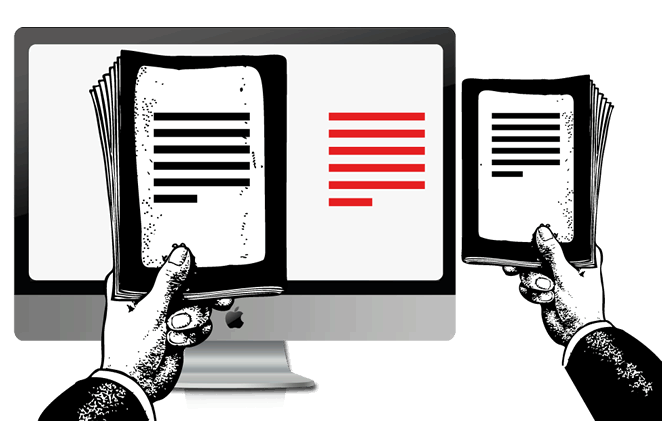 Using 10 pixel Verdana made sense in a time when screens were 640 pixels wide. Today it is a mistake.

The 100% Easy to Read Standard. I implemented (as closely as possible) on my blog, maybe your readers and even Eric might consider it too.

What’s wrong with purple? True, it’d be better with a lime green background, but we can’t all be perfect, can we?

I would never, NEVER have chosen a purple font myself; but honestly, I don’t find it all that off-putting or hard to read.

I never saw a purple page,
I never hope to read one.
In fact, a purple page is one
I’d sooner read the feed from.

(With apologies to Frank Gelett Burgess)

You only can use what the institution provides.
–Nurse Ratchet

Jeff your assuming I want you to think for me.

Why would he not design his site to be optimal for most people? If you find 100% contrast more readable, it’s trivial to force the page to be black on white for you. In Opera, it’s two clicks.

It’s slightly more complicated with other browsers, but I wouldn’t expect creating a user css file to change font colors to be out of the reach of anyone reading this blog.

First, it was a joke. And second, what I was referring to is the fact that his comment was about using what he found was the norm. But why must I follow the norm? I am an individual, I want the right to choose. I want the right to use purple on this blog, and gray on Eric’s blog if I want.

I am all for “defaults” that are the tried and tested to be the most pleasing and easy to you. But don’t forget about the individual. Jeff cannot call for an intervention of Eric’s blog without opening up discussion for personal preference.

Umm Eric, I think they are asking why cufflinks were invented.

These miniature works of art actually predate the shirt. According to the National Cufflink Society, evidence of their use can be found in ancient hieroglyphics in King Tut’s tomb. But cufflinks as we know them were first used during the 1700s.

No one knows exactly when the cufflink arrived. Its first mention in writing was in 1788, but for sometime before that buttons had ceased to be decorative and cuff-fastening slits were being cut into clothing. The ribbons or tape ties of the past were replaced with luxurious items, often made with gold or silver and set with gemstones. These were an extravagance reserved for the wealthy classes and were all hand-made.

While I do think you’re right about the awfulness of that particular combination, your own site is somewhat tiring to read long posts on as well. Why is the font size set to 80%? That’s small enough to make it unnecessarily tiring to read (for me, on my particular browser, at least). Is there a reason why your text needs to be smaller than the browser’s default size?

Also, you use a slightly grayish tone for your text. Why? Black creates a much better contrast. Example: compare the line “Posted by Jeff Atwood at December 19, 2006 10:23 PM” to the rest of the text in your post. This problem is worse in comments, where the background is gray(er) than the main page.

Oh, and I’m not really complaining, I normally use RSS for reading your excellent blog anyway, so these issues seldom bother me. You might want to think about them though.

I luv my feed reader.

Black creates a much better contrast

Most developers, myself included, are content with syntax coloring schemes that are fairly close to Visual Studio's default of black text on a white background. I'll occasionally encounter developers who prefer black backgrounds. And I've even seen...

Ok - so I setup a blog, and I see that “I” can pick my template, edit colors, html, etc. But I guess the end user’s can’t pick anything. Come on blog creators, allow the readers to customize.

Note that if I remove your comment, it’s because the comment is not on topic. If you want to contact me directly with any feedback, use the email link on the front page of the blog, not the comments for an individual entry.

Purple is a very calm color, how would it hurt your eyes? u make no sense!

The Readability bookmarklet can help you against purple

Thanks for your great blog!