Teach Yourself Programming in 23 Hours

I’m going to go against the grain here and probably get pummelled for it, but oh well. I have a few of the “Learn [x] in 24 hours/days” books and think that they were a good entry point when I knew absolutely nothing about the subject.

Not everyone has 2, 4, 6 or 10+ years of experience and is ready to pick up Code Complete, willingly read it and comprehend the topics. I think that is an unreasonable expectation of an inexperienced person who just wants to start learning the basics.

Obviously the books are outgrown quickly by most people, but I think they serve a valid purpose.

…the marketing has the opposite effect. im sure there are many other software developers out there that do the same

I’ve been studying ASP.NET 2.0 for weeks and I can’t make a breakthrough. After years of programming classic ASP with Textpad, .NET 2.0 is a major leap forward.

Sure, anyone can crank out some simple programs with Visual Studio 2005 after a few hours play, or the help of some of these books - but damn, learning to develop real applications takes some real time in the saddle and falling off the horse.

Well, even I make noises over much nothings. So whats my basic problem – why do people do what they do?

Its funny realy, but many-n time I have observed that if a particular friend of mine says anything on any topic – I would be on the opposite side of the camp and so would he - with me.

BTW, what do the sales figure show? Does the 24-hour marketing gimmick really work? It must… and so the titles popularity…

I think the 24 hours idea is - Spend a solid concentrated hour on each chapter to understand the material. If the concentration does not come this can be broken in to smaller units of multiple sessions. Then spend some more time for practicing the material. This time is not accounted for in the title. So it is actually a 24 sessions of which the first hour of each session is to read the material only.

I don’t work for the 24 hour books but I would be really glad if I can learn something new in 24 sessions of 3 hours each (1 reading + 2 practice).

I bought the book mentioned above and I quiet like it (everything was working fine until the website administration tool decided not to work, and couldn’t find a cure in the most advanced forums so I am stuck in hour 20 indefinetly), as said earlier, most writers think we live in MS land, I actually crossed MS from my dictionary awhile back, but I am back now with asp.net 2.0 thanks to Scott, the way he explains it is great.

At the end of the day we all have been to school but it’s not the hours spent at school that determines our understanding, it is the homework. just like when the school decided to cramp world history in a trimester (we all turned up ok, I guess

)
and I think it is safe to say that reading the book is good but practicing is the key. so i don’t believe books like this degrade a craft, in fact it bridges the gap between those who speak VB , c# and those who speak english, and in turn brings more followers to the craft. (that’s why you get the words “help please” more than anything else in any forum)

Lets not forget those who are quick learners, what takes someone 10 years to learn may take another 1 or 2 years…

Because of the publishers and their marketing droids we’ll have these titles forever, because they do sell more books, just like 99c beans vs $1.00 ones. And they probably all reading “Marketing for Dummies”

i dont really agree with most comments here, i started out with the learn asp.net in 24 hours and that was over a year and a half ago… have the people here who criticise it actually read it… it doesnt say become a professional developer in asp.net in 24 hours… it does what it says… teaches you to use asp.net… its great for learning the basics… you can then take it from there.

how can people criticise it if they’ve never read it…???

one final point, i have played the piano for over 20 years… there are books out there that claim to teach you piano in 6 weeks… however, you could learn the fundamentals in 24 hours… honestly. however, to learn to play it well takes a lifetime, but there are people who will be happy to play chopsticks and others who’ll want to play beethoven concerto’s… asp.net is no different…

if the only book on the market was learn asp.net in 10 years and the size of a telephone book no one would know it!

I went to a week long class on VS2005 with Juval Lowy and Michelle LalaLongname Bustamante and felt like we’d just really scratched the surface. Hands on labs with two leaders in the field, and 30 some hours was only an intro… You can’t even learn enough to be dangerous in 24 hours.

I’ll just leave this here, then Check this one out, a new trend: 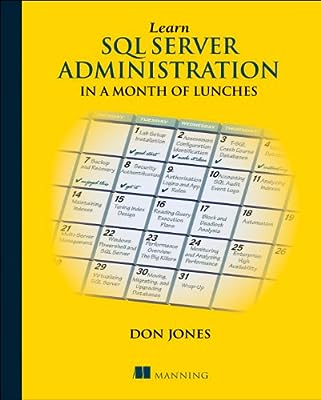 Summary Learn SQL Server Administration in a Month of Lunches is the perfect way to get started with SQL Server operations, including maintenance, backup and recovery, high availability, and performan ...

You can eat while you’re doing it.

All these books which promise to teach complex skills (C++, ASP.NET, COBOL) in (n time) are completely and absolutely truthful and correct. You can learn these skills in (n time)! It’s easy!

You know those days. It’s when you have that sudden “Oh, sh*t! Is that what’s going on with this stuff?!?” moment.

OK, it may take maybe three to ten YEARS (I’m slow…) before you get those special 21 days…but never fear - they’ll come.

“Oui” is “yes” in French. You now know French in less than a minute. I never said i’d teach you every little intricacy of it.

That is very true logic. I remember when I was new to programming/scripting, I started with the easiest, most basic language, HTML… that took more than 24 hours to learn at a competent level. Then you get into other languages like PHP (I’ve been doing this one for 8 years and still don’t master it. Perhaps because around every corner, something new comes out. I started with straight php… then mysqli, PHP object-oriented and PHP PDO - I prefer and use PHP PDO, but it is WAY different than the PHP I started learning in 2008), JavaScript (I started learning this one 6 years ago, still not a master), C++ (I’ve been learning this one for 2 years now, still not a master), Java (I’ve done this one for about 24 hours so far, not a master yet), ASP.NET 2.0 (I’ve never embarked on this adventure yet, maybe I"ll learn it in 23 hours), etc… it’s nearly impossible to even “read” everything in those categories in 24 hours, let alone, learn it and be efficient in it.