A Developer's Second Most Important Asset

This is a companion discussion topic for the original blog entry at: http://www.codinghorror.com/blog/2005/03/a-developers-second-most-important-asset.html
David_Grant March 16, 2005, 12:00am #2

I scored an Aeron at a dot com auction a few years back - I sit in that at home. At work I sit in a crappy-ish standard office chair. I always consider bringing the Aeron to the office but don’t want to seem like some kind of yuppie chair snob. Thoughts?

I guess I would ask my manager first to make sure he’s cool with it, then do it.

Of course you’re talking to the guy who secretly upgraded the motherboard, powersupply, CPU, memory, video card, and hard drive of his work computer-- it has essentially been rebuilt six million dollar man style, but looks identical from the outside-- so I’m probably not the best person to ask on this particular topic…

I love my Aeron. I took it to work, but missed it when I was at home. Now I work from home and don’t have to be parted from it. ever.

We exclusivly use the Leap chairs here and they are hands down the best chairs I’ve ever sat it. IMHO, they blow away Aeron chairs.

I got my Aeron 3-4 years ago off eBay pretty cheap (around $400 shipped I think). I weight 250+ and after 10 hour days for a couple years it’s starting to wobble on me and I’ve been looking for something new but the used ones aren’t available as cheap as they were back then. There’a a Steelcase dealer locally I may check those out before I buy another Aeron.

My ass knows nothing but Aeron both at work and at home. The one at home was an anniversary present from my wife. The one at work was a condition of me returning to work for my family after a 3 year leave of absence. Oh, and the one at work has red fabric.

Slate just published a review of some high-end office chairs: 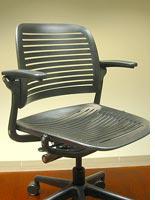 The search for the best desk chair.

Modern office chairs have grown far too complicated. Their underbellies have sprouted gnarly forests of knobs and levers. Their instruction manuals...

I’ve been rocking a Herman Miller Mirra at work for a while now. It’s a great chair for much less.

HOWEVER, I recently needed a chair for home. After weeks of research and debate on going with an Aeron, I decided on something else. This chair is THE BOMB and it’s about $500 less than an Aeron and $300 less than the Mirra. It’s called the Eurotech ErgoHuman. http://www.keystoneoffice.com/chairs/images/chairs/ME7ERG-large.jpg

There wasn’t shit on the web as far as reviews on this thing so I rolled the dice. Very happy.

I second the Eurotech Ergohuman chair, i’ve been searching and searching for a decent chair, and I was almost getting ready to drop the money on a leap chair or aeron, then I found the ergohuman chair. I haven’t purchased it because i’m reasearching prices right now. A local retailer had it for $585 but it’s looking like the going rate is $500ish. I was able to sit in the leather and mesh chair and i think i’m going to go with the leather version.

The Ergohuman chair is an awesome buy! Both Jeff and James are right on the money with everything they said. I bought the ME8ERGLO, which is the mesh chair without the headrest. I liked all of them, but prefer to not have a headrest. I found mine at http://www.beyondtheofficedoor.com/ergonomic-office-chair.php for $517.00.

I just ordered the Eurotech chair but I’ll be damned it’s heavy. Anybody compared it to the more visually appealing Steelcase Think chair? Apparently they have a good selection at Macy’s and I wasn’t able to check those out before ordering the Eurotech online.

Glad to see you guys are positive about the erghohuman chairs. Though it kinda looks like a Gilliam’esqe torture device, sitting in the me7erg was the most amazing experience I had. I’m leaning towards getting one too.
Even living in Los Angeles, I wish it were easier to find places that had a wider variety of chairs to try out than the local office depot or Staples. Well, if nothing else, it’s made for interesting blog writing.
http://stefanslife.blogspot.com

If you are sitting in your chair more then 12 hours a day I would recommend having a backup “Kneeling chair” from Hag.

They rock, by looking at it you would not expect it to help your back so much.

If you are in a chair more then 12 hours a day you need to mix it up with a Kneeling chair from Hag. They rock and you would never think it helps relax your back so much.

well, as a quick follow up - I bought the eurotech me7erg and I’m loving life. Sitting in it as I write this.
Even a friend of mine with an Aeron was envious.
I highly recommend them.

The best advice I can give is to sit in the chair before you buy it, or make sure the retailer has a good return policy.

I was hell bent on getting an Aeron, and I’ll admit it was mostly because of the “techy must have” stigma. So, I found a local dealer where I could try it out. There are a couple of issues with the Aeron w.r.t. Big Tall. They’re only warranted for use up to 300 lbs. Strike 1. What’s the point of spending that much if the kick ass 12 year warranty doesn’t apply? They’re really not built for people with wider hips. This may go to the 300 lb limit, but I found the hard curved sides of the seat uncomfortable because they dug into my hips. Strike 2. I can’t think of strike 3 right now, but 2 strikes is enough. I told myself, if you don’t fall in love with it immediately, don’t buy it. So, I came home without the Aeron. I was bummed, but felt I’d made the right choice.

However, the place also had a Neutral Posture Big Tall. Let me tell you, for comfort, it blows the Aeron away. It’s rated for 24/7 use and it’s designed for cops, 911 operators, etc. for long term use. And, it’s built for users up to 750 lbs! I have the “ultraleather” pillow-top version. I’m still playing with the adjustments to get it “just right” but I love it so far.

I’m in the process of shopping for a chair. Yesterday, I tried out both the ergohuman and the aeron. Not really sure how they compare since they were in different stores and running back and forth seemed a bit embarrassing. The Aeron comes across as a much simpler device…the ergohuman has all kinds of things sliding this way and that. They both seemed pretty comfortable. I did like the fact that the Aeron can be adjusted to tilt forward.

Regarding the Hag balans…I’ve got one of the kneeling chairs and for me it was a waste…I’m selling it to a friend for less than half of what I payed (about 350) since I’m just not using it.
It’s well made but the distance between the seat and the kneeling pad don’t adjust and are the wrong distance for me. It seems like this kind of adjustment would be a basic feature since we all have different body types…this chair just doesn’t fit me properly. I’m just under 6’…maybe my legs are too long…

Haven’t seen it mentionned here, maybe because it is quite a pricey chair, but Humanscale’s Freedom chair rocks pretty much all the other chairs.

The website’s store lists it as 1200$ or something but you can usually get it under 800$ from retailers (especially on ebay).