That, I think, is the beauty of bias lighting. I love darkened spaces, and I bought two sets of the linked Antec Halo 6 LED Bias Lighting Kits having read a similar article on the subject here: http://arstechnica.com/gadgets/news/2011/08/bias-lighting.ars

I work under a 16-foot ceiling (the alternative being not-quite-8-foot ceiling and much less real estate in the X and Y axes). It’s a kind of fluorescent retirement home, that is, that’s where they come to die (and take your eyes along with the process).

I don’t think back-lighting would help me at this point. But thanks, I’ll consider it for home.

Or … you could just use dark-themes on your desktop.

The thing I find challenging, is lighting a paper notebook (or other reading material) that sits beside the keyboard, without causing glare on the screen.

@JonathanH, I have my lamps carefully positioned just behind the plane of the monitor. E.g. at home, a light placed on a shelf above neatly lights the whole surface below without shining on the front of the screen.

One thing that you have to be aware of when changing your monitor’s setting from “project an X-ray of your skull bones onto the wall behind you” to something more reasonable is that many monitors that use flouro backlights have inverters that only work properly above 95% load. Once you get below that (meaning you reduce the brightness below 95% or so), they start to whine very audibly. Generally you won’t hear this because the PC they’re attached to produces enough noise to drown them out (although you may get slight headaches or feel somewhat nauseous from the high-frequency whine), but with a quiet PC it can become very obvious. I’ve had several Samsung’s that whine unbearably when dimmed, and had to send two Acers back before they sent me one that’s mostly silent.

Unfortunately there’s no easy way to tell whether a monitor will do this (presumably never LED ones don’t have this problem unless there are PWMs that oscillate audibly as well), so if you’re worried about this then make sure you’re buying from a place with a liberal returns policy.

It gets more complicated when photography is your hobby - the colour of ambient lighting affects your perception of colour on the screen. In Australasia the flicker of ambient light is 10Hz removed from that of the monitor, which is very painful. And it is all too common for LCD/TFT screens to flicker at lower brightness settings.

On the subject of room reflection, anti-glare coatings have a problem in that that they significantly reduce screen contrast - best results for photography come from high-gloss screen finishes (which are an option with some high-end brands), but then you have to rearrange the room to avoid reflections.

Check out the Lightpack project with:

Lightpack is an ambient display lighting system that syncs with on-screen content to dynamically backlight your TV monitor and computer with LED lights.

If the CRT screen is too bright and the room is dark, I get burning red eyes after a few hours. The remedy is to lower the contrast.

LCD is much better for your eyes than CRT, in that regard.

How do you reckon I could do this in an open cubicle in a bank?

The CRT is just burning my retinas away. I tried dimming the brightness of the 20 year old screen to no avail it is still torture. At home I already tried bias lightning almost by accident (my lights are so bright, that they reflected off the screen so I moved them behind and it has proved to be quite the nice solution.

Still people that works on corporate too light with high windows places with old as fossils CRTs are doomed to not be able to see forever.

One more recommendation for the bias lighting in the home theater. I bought the http://www.cinemaquestinc.com/ideal_lume.htm a few years back when I had a big screen CRT Sony, and I still love it on my 46" LCD Sharp.

I had the Eclipse computer light years back and loved it. Sadly it was broken during a move. I ended up replacing it with a small halogen desk lamp from Ikea sitting on a shelf above the monitor. I hadn’t thought about doing something like the ideal-lume, but it’s a good idea.

For those complaining about how sitting in a dark room hurts your eyes… THE PURPOSE OF THE BIAS LIGHTING IS TO PREVENT THAT. Read the content over at Cinema Quest about bias lighting for TV’s and why and how it works.

I hate you guys, as a front-end developer designing stuff most of the time I can’t work with brightness lower than 75/100 (while my LCD’s brightness is 300 cd/m2).

In addition this 15$ LEDBERG costs over 30$ in Europe, which is totally unfair with an average salary of 650$ in my country. Wow, in fact this 30$ ledberg is 20 cms shorter.

I found it too short!

I didn’t notice any particularly bright LCD’s until a couple of years ago. I don’t know if that is just the evolution of the technology or that I am buying higher up the range than I used to when I was a poor student.

My Apple Cinema display on full brightness actually hurts my eyes until I adjust to it. Obviously I don’t keep it at that level, my HP envy laptop is much the same. They boast about the screens but full brightness is ridiculous.

Thanks for the interesting article and the links. For years I have been lighting my computer work area with a swing-arm, Luxo-style desk lamp with a simple 60W incandescent bulb. I point the lamp upward to the white ceiling and the direct illumination washes the wall as well. Now I know what to call it!

I recently moved the HTPC with its 50-inch screen to a room whose walls are painted a very dark green. The indirect lighting does not work nearly as well. Any commenters who have ideas, I would love to hear them. (Or maybe there is a Stack Exchange site for indirect lighting now?)

Is this based on science? All ergonomics manuals I’ve read suggest proper overhead lighting is preferable to a darkened room (albeit with back lighting).

I’ve also asked this on Skeptics.SE:

Is it preferable to use a computer in a darkened room?

In addition this 15$ LEDBERG costs over 30$ in Europe, which is totally unfair with
an average salary of 650$ in my country. Wow, in fact this 30$ ledberg is 20 cms
shorter.

I didn’t know what bias lighting was before reading your article, thank you very much for sharing this. Today I went to IKEA and saw those DIODER led lights and went on buying them to give a try. I must say it really does the difference and makes my home programming a lot comfortable to my eyes. Here is my picture of my (yet unfinished) set: 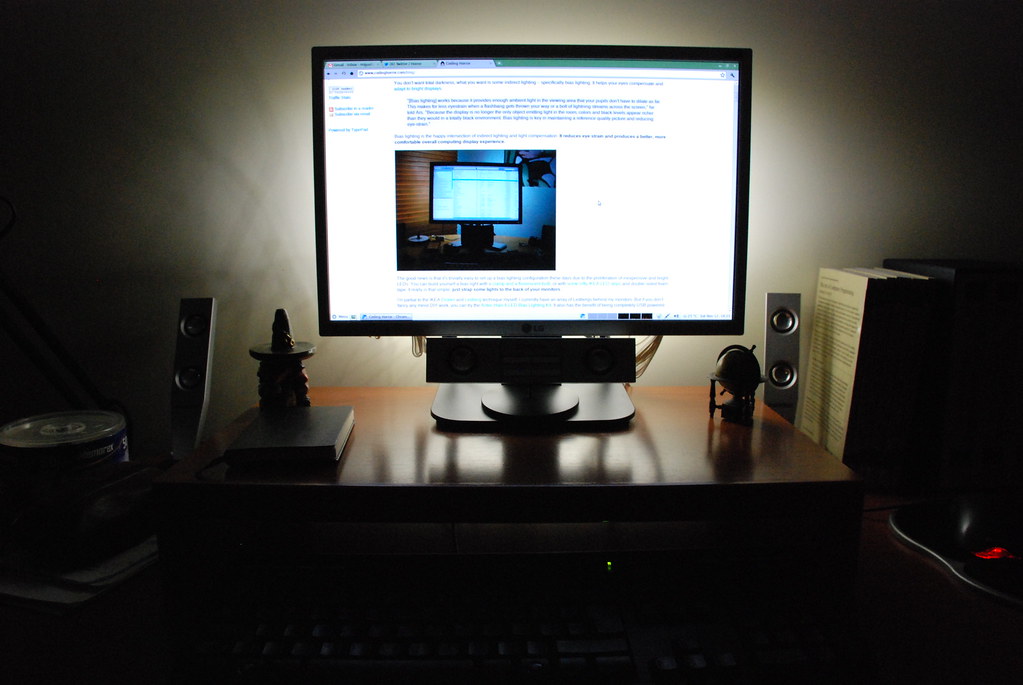 Thank you very much Jeff!

@Norman
me too: my current setup in in the photo (sorry for the bad quality but is is made with a surveillance camera attached to a capture card) 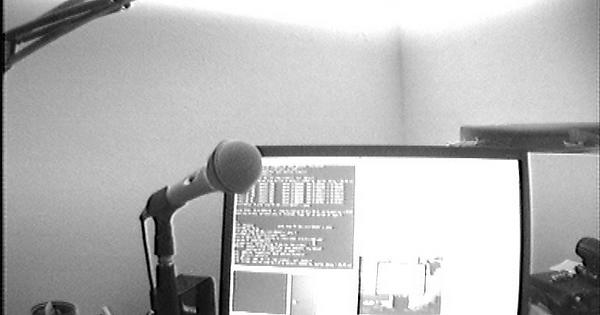 I’m using a 13 W CFL instead of the incandescent bulb after the failure of the last one. I could change the backlight ratio simply swiveling the lamp.

When I watch the telly I normally use a 1988 CRT TV set, with a set top box for the digital tv and as a set top top pox and a 25 W lamp into it and another 25 W lamp nearby.

I think that bias lighting anyway is old as the tv set: I have an Ambilight TV from Philips that has those LED strips at the back that automatically adapt to the colors on the screen - I swear I’m never going to buy a TV without it anymore. They should make computer displays with Ambilight too.

I’d definitely recommend flux before anything else. Also, any light behind your screen will bleed through, which is less than optimal and will strain your eyes.