Guitar Hero: Are You Ready to ROCK?

Although I'm a big fan of rhythm games, I had no idea Guitar Hero was coming out until I saw the glowing GameSpot review:

This is a companion discussion topic for the original blog entry at: http://www.codinghorror.com/blog/2005/11/guitar-hero-are-you-ready-to-rock.html
codinghorror November 6, 2005, 12:00am #2

Craig Beridon, IGN Insider: Nobody’s mentioned the sort of primitive male bonding-thing going on. Personally, I feel closer to many of the members of our editorial staff having stood side-by-side, firm in power stance, ready for the impending 24 bar solo to rain down upon the two of us like a barrage of mortar fire in our war that is rock. I’ve seen Tal’s face when the bridge to “Iron Man” begins its relentless assault on his fingers when set to expert difficulty. I’ve stood my ground when crazy-eyed Chris Roper nailed “The Breaking Wheel’s” damn near impossible dueling solo breakdowns, and responded in kind. I’ve seen the faces of my editorial compatriots when situations get the heaviest of heavy, and I know they won’t run scared. They’ll grit their teeth, dig their steel-toed patent leather boots into the ground, and carry me on their backs through the explosions of power chords and pelvic-thrusts, if I can’t keep up myself. We learn the truth about one another through Guitar Hero’s crucial tests of morale, and like weary combat veterans; we learn together.

So do you happen to know how to play the real guitar? I know that a lot of us computer geeks do. I’m just wondering if people who actually play the guitar will find it more or less fun than those that don’t.

INTERESTING… too bad it won’t REALLY teach me how to play more than a feeling IRL. That would be so bad ass.

If you want a high-tech way to learn how to play the guitar, check out the Optek LED guitar.

At higher difficulty levels (Hard and Expert), there is one “physical action” per note. And those actions are somewhat similar, eg, higher notes vs. low notes and chords.

But the way you’d play a real guitar is of course totally different. It captures the /spirit/ of playing a real guitar extremely well according to this IGN review by a guy who “[has] been playing guitar for 14 years now”

… but it’s ultimately just a game.

It was so eerie. They played AC/DC’s “For Those About To Rock” before Ballmer came on, and I was totally about to bust out my plastic guitar.

There’s a big interview with the developers (Harmonix/Red Octane) in the latest EDGE (british gaming mag), and one of the meta-goals of the game is to encourage kids to get a real guitar (apparently the game says this when you complete the highest level) and learn to play for real.

It’s not a teaching aid, but it lowers the barrier to trying it out – hopefully.

The video of this song is insane!

This game is the best game I have ever played. This game seriously kicks ass.

“I love rock and roll” is a simple song, and I can’t help but leap around the bedroom when im playing it. I can EVERY NOTE in Medium, and I’ve only had it for a week! 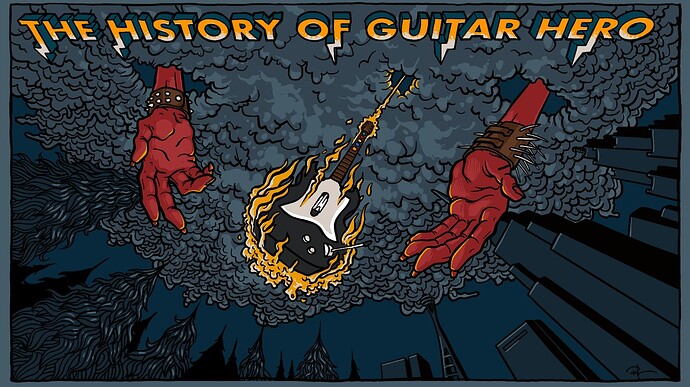 The Oral History of 'Guitar Hero'

How to accidentally change the world.