On the Discourse meta forum, there is the ability to reply as a new topic (it is a flyout link to the right of the age of a given reply.) That seems to be missing here.

Is that ability turned off on discourse.CodingHorror? Or is it an ability you only gain with enough XP. And if so, what level do you need to be to reply in a new topic?

From my understanding of the Discourse concept (which admittedly may be fundamentally flawed) the reply in a new topic feature is a core piece of “flattening” out the conversation and keeping reply chains reasonably short. One of the original complaints of old style forums was that the topic would mutate after three or four pages of discussions. And without that feature here, you can see that same sort of drift happening (or starting to happen) in the comments for the most recent blog post.

Did I level up or something?

Did I level up or something?

Yes you did! New users have grey usernames. You achieved trust level 1.

Hm. It would be cool if there was a way to see what you needed to do to get to the next level. Like an XP meter or something. And then knowing what sort of powers you gain at that level. (ala the excellent Daniel Suarez Daemon/Freedom series).

It would be cool if there was a way to see what you needed to do to get to the next level. Like an XP meter or something.

This video discusses the concept at length, and gives examples of communities where the system has backfired:

tl;dr; – design the system right and it isn’t bad.

Interesting video, but it is certainly not a balanced perspective on the idea of gamification. It is pretty one sided. Not a single example of gamification that is well done, or how it works.

I assume the answer to those questions is “no, it is not.” Why not? The reason it isn’t a “game” in these cases is that the rewards are meaningful and the steps to achieve them are well thought out and balanced over thousands of man years of experience developing them.

Leveling up your CodingHorror character does not have to be some crappy “badge” system where people run around trying to get 5 more replies to earn the “Fast Talker” badge and complete the requirements for level 8 or something. It should be based on community generated rewards for standard participation. The people who are on the site the most and participate the best (based on community votes) will naturally rise to the top.

For instance, I’ve leveled up my StackOverflow character to around 3k XP almost by accident. I asked and answered some questions over the years as they came up. And probably 70% of my XP comes from five or six answers I wrote years ago. I’ve never purposefully set out to try and increase my XP, though I know others have – and they have been rewarded for it. Sometimes tangibly, sometimes just in community regard (who knew of Jon Skeet before StackOverflow?)

And more to the point, there already IS such a system here. You have to level up to see Reply In Topic. There are probably other levels, too, which grant more abilities. Maybe it isn’t important to know what to do to reach the next level, but it may be important to know the level of the person you are talking to (and by that, the regard with which the community holds this person). If Jon Skeet weighs in on a question at StackOverflow, people give his words more regard because of his high XP. He may still be wrong, but he is (deservedly) given the initial benefit of the doubt.

Don’t get me wrong. I think that gamification, when done well, is a great way to get people to use a system as intended. I’m a big believer in gamification. As someone whose spark and interest in software development grew out of an interest in game development, I’m all about creating great learning experiences through game dynamics.

But like you’ve said, getting it done right is tricky. The examples you gave of a progress bar is a common one that is implemented poorly. Its great for something like careers.stackexchange.com or linkedIn where there are obviously structured steps that need to be taken, but I don’t think its a good fit for a general ‘leveling system’ geared to make people act civil. Similarly, I do agree that a reputation system is a good fit for stackoverflow - where experience and trustworthiness matter when it comes to judging what answer is best, but I don’t think that matters as much in a discussion platform.

I think the more abstract notion of “act civilly on a forum” needs a system that rewards ‘players’ with something that doesn’t have defined goals upfront - at least not those that are obvious stepping stones. The only visibly defined goal should be something like the ‘universal rules’ they discussed on discourse’s blog.

There was an old discussion about badges over at the meta site, so I do believe @codinghorror has it as one of his potentially future options. That there is an underlying leveling system for rights and privileges shows that they are going in that direction.

I think badges/achievements can be a great way to create an atmosphere that encourages people to act civilly on a forum. Their good behavior is encouraged because they are given rewards for doing so, not because they see it as the next step in the xp ladder.

If you take a closer look at the gamification video, he’s actually showing how there are competing ways to get it done. The 1up method of a progress bar + leveling system creates a lot of ‘shitposts’ , but places that use the badge system (Escapist) creates a more effective way of going about it. Ultimately it boils down to a different style of reward system. One appeals to our drive to advance and make progress and is effectively a Skinner box intended to extend engagement, the other is about behavior adjustments similar to Pavlovian behavior response systems.

The hard part is structuring a system that encourages the right kind of behavior. Having goals of “fill out your profile” or “make 3 posts” to advance will end up getting people to make crappy posts and fill out their profile with random junk. These types of leveling should be kept under the sheets and really only visible to site admins (or people who have graduated to the point where they have moderator roles).

For a more direct example, the lionhead studios forum used to operate under a points system - all it really did was encourage people to post in the ‘word association’ thread and other off-topic discussion threads. In the end I think this only lead to a higher degree of noise on the site.

I do think that some type “post moar” style of gamification system would be useful to help bootstrap interest in a community - but something that should be turned off once engagement is up to speed. The skinner box nature really only needs to happen during the early stages of a forum - once people start posting, the appeal to keep coming back is more about the interaction and sociability of thing whole thing.

As an side, the only reasons I don’t go on meta anymore is because my phone is old and the browser is incompatible. I still click on the notification emails because I enjoy the communication. and get disappointed when I forget.

I recommend watching this great talk on ‘getting gamification right’. And there is also interesting one on gamifying visual studio to teach developers to practice good programming habits. A great follow up are the couple of episodes of extra credit that discuss gamification and particularly relevant is the gamification of education.

Note that reply as new topic has moved to the little button at upper left of the composer, like so: 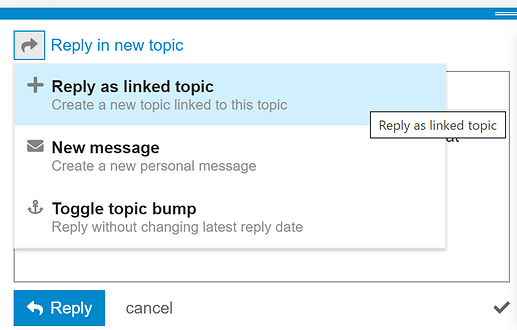