It’s running the latest Intel processor and with 8Gb of RAM, and an SSD so it’ll be fine. In fact it would kick butt. I’d be comfortable using that as my daily work machine with Visual Studio.

What other apps do you have for your HTPC? Obviously, Steam for the game. But what about the media server? Something like Plex?

@codinghorror Have you looked at the Shuttle XPC slim Barebone DH170? IMHO it’s specifications outclasses your HTPC / gaming setup in all areas… The only caveat I can think of is that your storage setup must be adjusted to a M.2 boot device and only one 2.5" sata disk. Maybe not for everyone, but the dual network connectivity was a major selling point for me.

Or did I miss something???

You might be able to source a cheaper H170 motherboard than mine.

That’s a H170 box you quoted, so it is basically identical, I am not really following your logic here about one being better than the other?

When using the PicoPSU, how do you power the HDDs?

The PicoPSU includes a drive power wire/header, though I did indeed use splitters as I have three drives attached.

how well do you think this machine would fair as a regular browsing/development machine?

It will probably be fine, but, I would get a slightly higher spec CPU for development, a true quad core.

And @randito as I mentioned upstream, I am a simple guy. I am fine with a boring old list of files in a folder as my media browser… so I use vanilla Windows 10 with the tablet UI.

@codinghorror You are correct, but it’s the total HTPC package I was trying to address. My remark is also a bit misplaced because you talked about “I only upgraded the guts of the system, so the incremental cost is low”. So let me rephrase that; the total HTPC package of the new Shuttle DH170 looks better (size/performance/etc) than the HTPC you present (as an end product, not an upgrade). And yes, thats a bit cheating on my side because I’m comparing a new product to an upgraded one. Starting from scratch has it’s advantages

Are you still using the PicoPSU-90 which looks like a 20-pin motherboard connector? Do you just leave the other 4 holes open on the motherboard?

It includes both power connectors.

What about an NUC, old laptop or something like a single board computer ? (Raspberry Pi or something more capable)
Do you use HDMI CEC?

The DH170 does not support DDR4 ram and I’m a little worried about the fan noise. The case seems a little to small for a desktop cpu.

Well as I noted upstream the DH170 is limited to 15w TDP CPU which won’t be able to play games of any significance, you need 35w TDP for that (or even more, if you can afford the power/heat/noise). DDR3 won’t cause any noticeable performance penalties, but DDR4 is more forward thinking and definitely recommended for any new builds.

If you only plan to stream games you should have no problem with the DH170.

I recently came to the same conclusion. I was getting ready to build a full PC for the task after my combo of Raspberry Pi + Chromecast didn’t do what I wanted, but when I saw Nvidia running a sale on the Shield TV for Cyber Monday I decided to give it a shot. I run Plex server on my main desktop and the Plex app on the Shield works great with it; plus with Nvidia Gamestream(requires an appropriate Nvidia GPU) I can stream any of my PC games to my TV over the network. Eventually I’ll probably build a dedicated NAS to hold my media but for now my setup works great.

Sweet! Thanks for answering, I’m looking forward to building a minimal dev station

Hi, Just to check with you, How much of the shared memory you use/set inside motherboard?
I am looking to buy same motherboard, but worried about only 512mb shared memory, when compared to asrock’s 1792mb max shared memory.? any advice…
Planning to build HTPC/with storage combined, in a Node 304 casing.
Mostly play bluray rips & online streaming videos… 4k may be in future. kindly advice

thanks for these posts, I built my HTPC based on your 2013 post by using an excellent i3-4340. The Antec ISK case is a fine one, however the USB3 cable inside gave me nightmares, even after replacing it it’s still very loose and sometimes disconnects by mistake. I wonder if you ever had any issues with that? Or maybe you fixed it with a drop of silicon?

Another question: do you think it would be viable to cram in a GTX 970 Mini ITX? I’d like to play some new game like UT4 with it, thus I was wondering if I have to build something from scratch in a larger case or if I can upgrade this. There seems to be enough space in there, but I wouldn’t bet on it.

Maybe, you have to be very careful with power supply requirements with a video card, the power use goes up dramatically in game.

Yeah I would be okay to have power consumption spikes while stressing the GPU, I was really wondering if it can fit in there. I guess I should also use an external PSU for the card.

Edit: I decided against installing such card, this case is not apt

Thanks for taking the time to write all of this up, it was just what I was looking for! I am about to take my first step into the world of HTPCs and I had a couple of questions for you that were not covered in your write up.

First of all, which keyboard and mouse are you using to control your HTPC. I noticed you mentioned that you don’t mind navigating windows to open up videos and I am of exactly the same mindset. I would just like to know what devices you would recommended for controlling it via the couch.

Secondly, do you have a Blu-Ray Drive in your HTPC? If so I take it playing blu-rays is not an issue with this setup? Hows the space inside if I were to put a slimline blu-ray drive inside?

which keyboard and mouse are you using to control your HTPC

Funny you should mention! I just got this and really like it a lot: 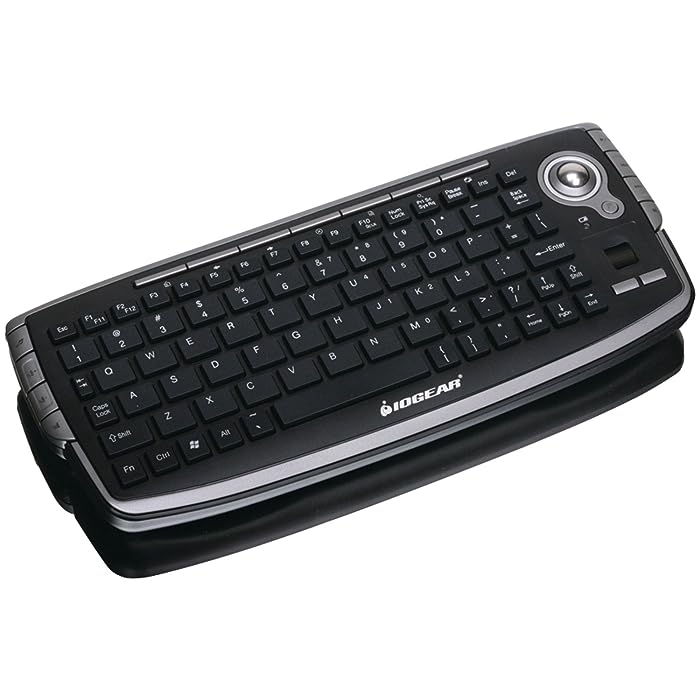 IOGears innovative new 2.4GHz Wireless Compact Keyboard with Optical Trackball and Scroll Wheel gives you the comfort and freedom of up to 33 feet of wireless connectivity between you and your videos, ...

I don’t use blu-ray drives or discs at all at this time, but in theory the case supports a slimline internal drive. And an external USB is always possible.