I've loved many computers in my life, but my HTPC has always had a special place in my heart. It's the only always-on workhorse computer in our house, it is utterly silent, totally reliable, sips power, and it's at the center of our home entertainment, networking, storage, and gaming. This handy box does it all, 24/7.

Don’t you need a fan for cooling the CPU? I’ve just wondered, because your price list seems not to include that (as well as heat transfer paste).

I bet at 35W the retail Intel cooler is aplenty. These gigantic tower coolers are becoming more and more pointless – unless you get a “K” series CPU, the TDP of the Skylake CPUs do not go above 65W which is easy to cool quietly.

Good point @Martin_Thoma the i3-6100t I purchased did not include a cooler, it was a bare chip (literally). I transferred over the old stock Intel cooler from my retail packaged i3-4130t which did include one.

If you too get a bare chip and need a cooler something like this is fine (it’s quite similar to what the Intel stock cooler looks like for the i3-4130t): 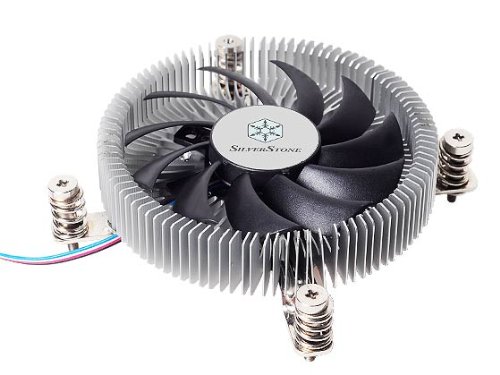 Note that the case has an 80mm fan in the side, and I suspect the system would actually work fine with passive cooling provided the 80mm side fan is properly temp controlled. So any reasonably large heatsink that fits, minus the fan. 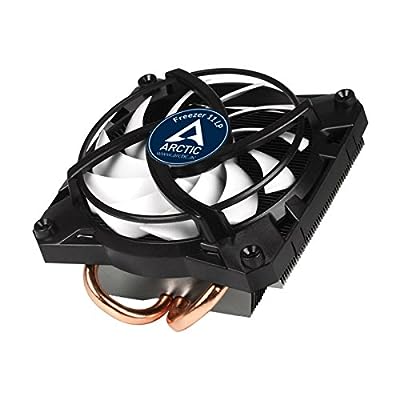 I also should have mentioned, I did set the fan profiles to “silent” in the BIOS so the CPU and case fan would both be at lower RPMs.

Also since someone on Twitter asked, here’s what 4k HEVC media playback looks like on the 2016 HTPC build: Do you find that the XBone controllers work well on older games? Like you, I have a giant Steam backlog and recently built a Skylake-based HTPC. I’ve been using 360 controllers with the wireless adapter, but I keep eying the upgrade. You think it’s worthwhile if I don’t also own an XBone?

I wouldn’t say the Xbone controllers are a must-have or anything, but they are noticably nicer than the Xbox 360 controllers when “in hand”. At least that’s what I thought when trying them out. You could tell they were a generation ahead, but it’s mostly little tweaks, not any one thing that is dramatically better about them.

Pretty subtle stuff, but I am now remembering that the d-pad is greatly improved, so that’s probably the biggest reason to upgrade, if you use the d-pad a lot. (I don’t)

I would love to see a post about the software you use for your HTPC… I was very excited about my (first) HTPC build I did a few years ago, which also included broadcast TV with a TV card.

I have now however started to lose faith, mostly because the software is a continual PIA that requires constant tweaking and fixing.

I use XMBC (now Kodi) and have tried various ways of accessing my own media from it, including direct, Plex and Emby. I find it all incredibly flaky - Kodi updates break either the main application, skin, or both on a regular basis, and then take a long time to get fixed, and getting remote control support to work properly and map all the functions correctly takes ages (and is difficult for my family to use).

Most importantly, third-party apps is a huge problem. Nowadays Netflix, Amazon Video and even Spotify support is becoming critical for me. Originally XBMC had app support for all of these (sometimes having to resort to ugly solutions like web scraping), but lately as the streaming providers have started to clamp down on the access to their networks from unofficial sources, nothing works anymore. I am having to resort to ChromeCast (or I guess Roku/Fire TV/Apple TV) just to use these services, which make me question why I have an HTPC in the first place, since Plex etc. works on these devices as well.

Anyway, my all-encompassing box that can play broadcast TV, Blu Rays, local and remote streaming, with a single remote control interface which I once thought was very achievable, now seems like a pipe dream.

I calculate around $800 in parts for a new build (based on the parts you’ve listed which seems complete). Windows would knock that up a couple hundred but is Linux a viable option here? I know Steam supports Linux – can you stream games from a Windows desktop to Steam on Linux?

And what about Netflix? I forget – does it still rely on Silverlight or have they managed to free themselves from that albatross? A quick search seems to imply it’s possible but that doesn’t mean it works well.

@Cunk, you can stream from Windows to Linux on Steam, yes. You could actually run SteamOS directly, which is free. Also, I’m pretty sure that last night when I was watching Netflix it was using HTML5 video, not Silverlight, but it was on Windows so I can’t swear it would work properly on Linux without hacky workarounds.

And @rikoe, it sucks that you can’t use all these services from one “friendly” frontend like XBMC, but I make do with a bunch of stuff in-browser, using this: http://www.amazon.com/Lenovo-Multimedia-Remote-Keyboard-N5901/dp/B0036VO67I . It’s not perfect, but it’s the least irritating “couch mouse” I’ve found.

Anyway, my all-encompassing box that can play broadcast TV, Blu Rays, local and remote streaming, with a single remote control interface which I once thought was very achievable, now seems like a pipe dream.

This exists, it’s just not an HTPC, it’s an Nvidia ShieldTV.

But it has it’s own drawbacks, the first being it’s four boxes to do all that, the ShieldTV, the HDHomerun it needs to do broadcast, and the third NAS/Server box for holding the local media and then a Harmony Smart control (with hub!) to make that all sane and controllable.

I recently bought the Steam Link. The thing is awesome, it’s really cheap and suddenly I can play all games I have on my gaming computer. I was thinking of buying a PS4 but then couldn’t come up with a reason as to why.
With this thing games are dirt cheap from Steam and I can enjoy these games from the comfort of my couch.
However I do not see myself ditching my HTPC with Kodi for watching movies.

I too would am interested in what software Jeff’s running.

A few months ago I resurrected my ~7 year old HTPC build (Core 2 duo) to watch broadcast TV and movies on.

Like ricoe I tried Kodi, (formerly XBMC) then Emby (formerly MediaPortal). It’s funny how these projects are still around, just renamed.

I’m pretty happy with the current incarnation which is nothing more than a clean install of Windows 7 with Media Center (for broadcast TV) and Plex Media Server and Plex Home Theater. Nothing else installed, no codecs and dicking about, nothing.

This old beast is still able to watch most things, except for some new x265 1080p rips - they play fine with VLC but stutter too much through Plex. If that starts to bug me maybe I’ll upgrade. I don’t run it 24/7, it sleeps when not in use so only has about 4 hours usage a day - not enough to justify an upgrade just for the power savings.

I built a few with a la carte parts, but ended up happiest with an Intel NUC. Current high end NUC6i5SYH has a street price of $300. It doesn’t have a bluray, but a BD player is cheap, and I’m not fond of PC interfaces to them anyway.

What real advantages does a home rolled one have over a NUC?\

For me it is about choices and being able to target certain priorities, plus you save some money DIY over a NUC. I just did a low power desktop and freeNAS server recently. I built a low power system based on the N3700 Pentium (4x core, 1.6Ghz 6W TDP), with the ASRock N3700-ITX. So for a system that occasionally streams, occasionally games and mostly is a linux desktop or a Windows Lightroom/PS editor, I have a capable cpu, 16GB RAM, 500GB SSD (freeNAS for main storage elsewhere in a 1GB home lan), and I am into it just over $350? It can do triple displays (displayport + DVI + HDMI), super low power (about 10W idle) and runs games in low/medium resolution.

It really is a golden age because we have so many choices (100s of cpus and POCs it seems like, in many forms) now that you could in theory power off solar panels.

Windows would knock that up a couple hundred

Well, there are grey market CD keys out there for Windows 10, if you want to go that route. You didn’t hear it from me!

Speaking of, for software I use a very vanilla Windows 10 install with the “tablet” UI which works great for bigscreen. And the Windows 10 Netflix / Hulu / etc apps. I am fine with the “bunch of files in a folder” UI though I know it is not everyone’s cup of tea, they want fancy movie posters and banners as they scroll through their media. I’m fine with a boring old list of playable media files in a folder.

It is important to note that Steam “Big Picture” mode has gotten a lot better in the last 12 - 18 months, in terms of:

I am sure the push for Steam Machines running Linux (and otherwise) was a big motivation for this, but clearly Valve is working hard on this, and the progress really shows.

NUCs could work, but I need multiple media drives (many terabytes) for my purposes, and I don’t want them to be external dongles. That said if you can find a NUC with Skylake in it, and media storage capacity does not bother you, should be a fine choice. Specs are here:

Intel Publishes the Specifications of the Skylake NUCs

Interestingly the CPUs used there (6100U, 6260U) are only 15w TDP so gaming is going to suffer. Real hard to do any kind of serious gaming at 15w TDP, that’s why I set my TDP budget to 35w. Fine for streaming, of course!

When using the PicoPSU, how do you power the HDDs? Are there headers on the motherboard for this?

@codinghorror how well do you think this machine would fair as a regular browsing/development machine? Would VS kill it? I obviously don’t mean it in a workstation kinda way, but more of a sharpening the saw, learning new languages, develop a small mobile app, kinda way. Would it drive a 2560 monitor for those activities?

@codinghorror What software and remote (for media) do you use?

I’m tempted to build a media PC like this, something for both videos and Steam games on our largest TV in the living room. Right now we have an Amazon Fire, AppleTV, and a separate PC for gaming. I’m tempted to do this because I’d rather have full control over our specs, play Steam games on the large TV, etc. Half of what I buy for our PS4 would probably be better on PC (mods, etc).

I can only agree that 10W is a lot better than the 80W previously, but I can’t help thinking switching equipment every 2-3 years produces a lot more CO2 and toxic waste than sticking to one box for many more years. Current drain is not everything, and I wonder where the previous generations HTPC waste goes.