When I wrote about The Golden Age of x86 Gaming, I implied that, in the future, it might be an interesting, albeit expensive, idea to upgrade your video card via an external Thunderbolt 3 enclosure.

This is a companion discussion topic for the original entry at https://blog.codinghorror.com/thunderbolting-your-video-card/
2 Likes
Alexander_Wright March 24, 2017, 9:34am #2 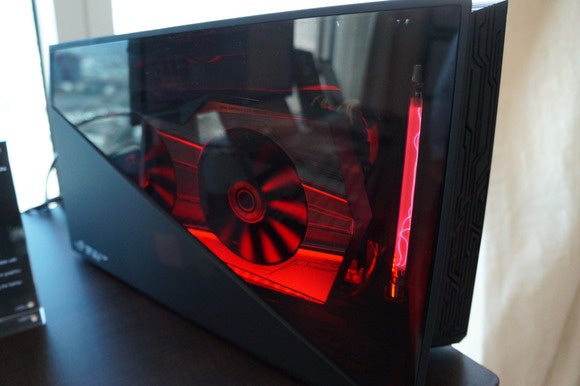 The first generation of eGPUs had proprietary connectors that limited their reach. A new crop of models with Thunderbolt 3/USB Type-C could help eGPUs become a viable product.

What’s the benefit of this setup compared to a MiniITX or MicroITX build in a nice casing?

A Micro/MiniITX build would be

PCI Standard changes / gets better every few years, so you can’t use your thunderbolt box any longer as a normal mainboard if you don’t want to have your graphics adapter underperform

BTW: The OLED display is extremely cool, now I want one too

I’m actually using an external GPU on my MacBook Pro. It’s a hack, and expensive, but it works.

I got it from a company called Bizon (warning: ugly logo), but people have also built it themselves.

I’m not a gamer, but I do 3D graphics. I figured it was this or a hackintosh. At least with this I can unplug the card and get a fully functioning mac laptop.

Is the OLED a HDR display? There have been several coming out latelly and they seem… Lets say interesting.

I have been using the Core with a Titan XP for a three months and for GPU intensive games it is awesome. THe issue is with games that require heavy CPU usage. Doom runs at 100+ DPS with all settings maxed but Division on the other hand runs at 50 FPS. Both on a 3440x1440 ultrawide.

This CPU bottleneck gives me benchmark and FPS envy.

Despite the lost performance in some games the ability to incrementally build a “desktop” like experience with my existing laptop was key.

The question now is do I give in to a full desktop and spend another $2000 or use the Skull Canyon with Core for another year or so for only $800.

You’re spot on about Mac users. I still have an aging, monster, gaming rig. But, given the hassles of Windows 10 and, now, nVidia’s ridiculous addition of a LOGON to their driver configuration software, I’ve decided that I’m not buying another PC. However, many of the games I like run just fine on a Mac, given sufficient horsepower. Civ V plays OK on my 15" MBPr, just on the embedded Intel graphics, but I hate the heat and fan noise it generates. I’ve been looking at these external enclosures for a long time. What keeps me from buying them (in addition to the cost) is that you have to do some very foreign things to the kernel on a Mac to get them to work. After 19 years of jerking around with Linux on the desktop, it’s a hassle I’m not willing to undertake. I said all of that to provide the context to say this: If Apple would officially support an external Thunderbolt enclosure (and popular game-playing video cards), it would be a DAY ONE purchase for me.

EDIT: I see from a comment above that the “Bizon” box has an installer, so there’s no monkeying around with kernel modules, directly… I may have to reconsider this.

Seems like there might be a market opportunity for a graphics manufacturer who’s paying attention. Making an integrated unit would save on redundant connectors and improve the cooling. Might be cheaper too.

Once upon a time there were no external hard drives either.

I guess I should have read your comment before I made mine below. I should know that I’m not clever enough to have an original idea!

Very much a rumour, but there’s also this possibility: 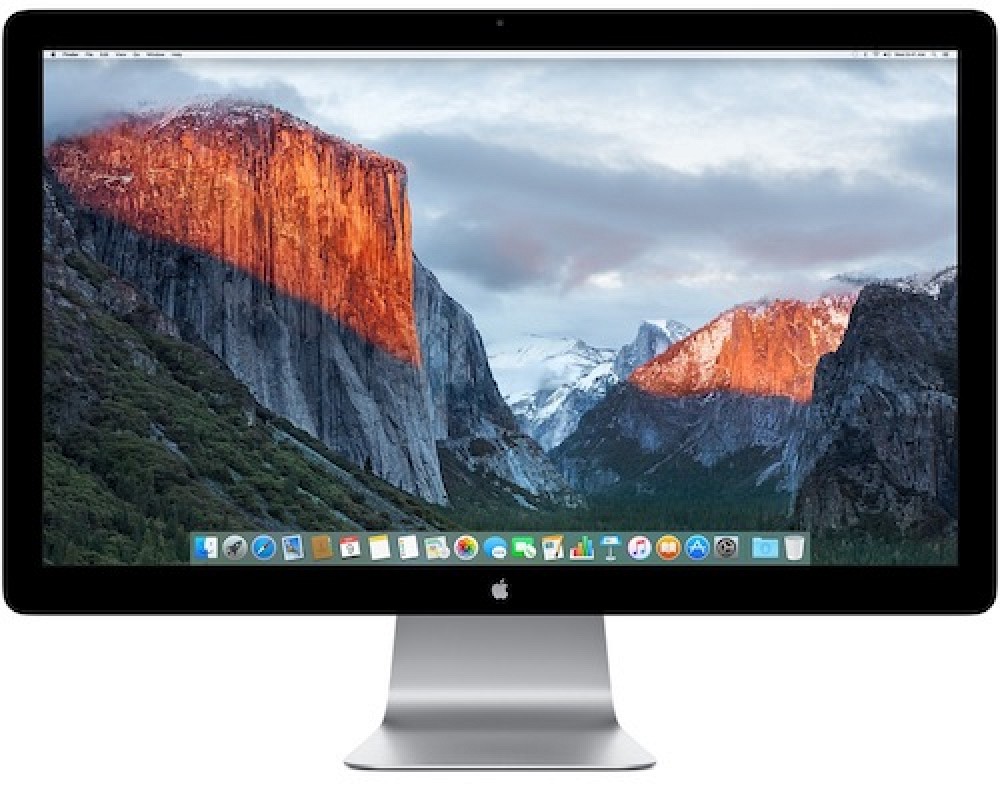 New Thunderbolt Display With Integrated GPU Still in the Works

Apple yesterday announced plans to discontinue the 5-year-old Thunderbolt Display, leaving it unclear if Apple's display business is coming to an...

If anyone is interested, I wrote an article a few months ago about building a super-simple, hack-free TB2 build for use with older Macbooks. It’s not guaranteed to work with all configurations, and it’s only good for BootCamp, but now I don’t feel the need to upgrade for another year or more.

I’d imagine laptops, mostly. Most PC gaming I’ve done has been sitting on the couch with a laptop while also watching TV with my wife.

The Akitio Node does the same thing as the Razer Core, for $299:

Why are you using razer??? Alienware 13 R3 has a built in OLED Display, also dell alienware amplifier is way better than thunderbolt 3

You know, you could build a complete PC, with GTX1080, in a box that’s the same size as the Razor Core - And again, Linus has you covered: https://youtu.be/s2W0Lsf7hec

OLED truly is an awesome visual experience, but aren’t you concerned of what yours display will look like in just under a year?
I’ve been using AMOLED phones for years now and daily usage of Google maps burns in two bars (top and bottom) in under a year, almost unusable after 2.
I bought an upgrade, also AMOLED, because people claimed burnin was a thing of the past and I am typing this comment over those exact 2 burnt in bars…

Although I will SORELY miss OLEDs contrast and colours I can’t be dealing with this anymore. I own a Dell XPS 12 convertible with the screen ghosting issue that plagued the lineup. It gives me a very good indication of what will burn-in will look like on a PC monitor: (task bar with pinned / frequent apps, subtitle blur if you watch a lot of subbed content and your browser top bar complete with the address bar, icons and frequented tabs)

My honest, unbiased, 2cents. Take it how you will.

I was playing PS4’s new flagship game Horizon ZD on the old non pro version of the PS4 in 1080p and turned on HDR and it seems like an entirely different set of shaders were used. The realism provided by better shadows was much more than a bump in pixels per inch would have provided… Maybe it’s a quirk of the PS4 and how ruthless they have to be to get just a basic frame rate but I wonder if the focus on pixels is a brute force approach to a better experience. Google has improved the JPEG compression algorithm with “psychology”

and maybe something like that will be incorporated into future shaders… Also putting more grunt into modelling characters expressions and lip sync’ing etc would be helpful more than more pixels IMO.

There’s been big improvements in the last couple of years, from what I understand. And phones (small displays) were the testbed. It is interesting that Apple won’t be using OLED until the upcoming iPhone 8 later this year, and given their… strictness… there might have been a reason for that.

I own a Dell XPS 12 convertible with the screen ghosting issue that plagued the lineup. It gives me a very good indication of what will burn-in will look like on a PC monitor:

That’s probably why there are literally zero OLED monitors you can buy for PC, yet. I hope that changes in the next 5 years though!

Certainly 2016 was the sweet spot to date for OLED in TVs, where the price got down to “reasonable” and the technology is getting to a mature place with all the bugs worked out.

you could build a complete PC, with GTX1080, in a box that’s the same size as the Razor Core

That is a cool case, wish I could buy it even with infinite cash… but the whole point of this exercise is to decouple the GPU upgrade cycle from the system upgrade cycle. So you can plug a monster GPU into any system and transform it.

Connecting a GPU via a cutting-edge, external 5 gigabytes/sec Thunderbolt 3 connection is where the action is! That’s fascinating. Building a whole new PC system up is easy, it’s common, it’s just not … interesting.

This is pretty neat, I have to say. Pity my XPS13 doesn’t have a TB3 port. Though I see that there are cheapo Chinese alternatives (about $40US if you buy directly from China) that connect via mini pci express. My laptop appears to only have a PCIE 2.0 slot in it though, so that would likely cause some serious bottlenecks.