One advantage of being a geek is that our habits-- as such habits go-- are not terribly expensive. I've written before about my interest in auto racing. Instead of spending $100,000 on a sports car, I've built a nifty racing simulation rig that delivers many of the same thrills at a tiny fraction of the price. It's one of my few indulgences, and I'd like to share how I built it with you.

One commenter said that you could not experience G-forces.

That’s wrong ;). Researchers are developing a pulse unit that interferes with your balance processing regions, and can (in the case of stroke victims, etc) supplement your kinaesthesia. Trying to find a link to the patent.

I expect that in 5 years you’ll be able to buy a headband that will give absolutely realistic sensations of falling, jumping, leaning, and driving.

Check your inbox you should have my address, you can ship that UPS it should be the cheapest!

you forgot the fans (for the speed factor)

Never quite got the attraction of car games. Can you play Quake with that thing, and if you get hit by a rocket, will the bass kick you out of your seat ?

Maybe you’re thinking of this:

Racing sims are great fun, though!

I’ve taken my obsession to the other extreme. I’ve started to garner big corporate interest in helping me throw track events.

where the hell do you have the space for all this stuff!

The house we bought has a seperate 9 x 15 foot room behind the house. It’s not connected to the house, but it’s fully finished (minus heating). You have to walk out back about 8 feet and unlock the door to get there.

The playseat is actually more compact than it looks; it can be slid over on its teflon casters and stowed in the corner of the room when not in use. (The seat also folds over, but I rarely need to fold it.) We use this room for other things, too, like exercise DVDs, Guitar Hero / Rock Band, DDR, etcetera.

I realize dedicating a “boom boom” room is probably not reasonable (outside of MTV Cribs), but this was kind of a special case, I guess. What would you do with an unusual room like that?

fantastic.
where the hell do you have the space for all this stuff!

do you hack the controller?

Not my sort of thrill, but it does make me wish IT professionals in Australia were paid even a fraction as much as their US counterparts (;P)

I’m thinking I might put something like this in my basement, to help learn some tracks before I show up on them, as track-time on the well known tracks is limited and expensive, and I’d love to make the most of it.

Many pro drivers use simulators to train. From the Wikipedia entry on Nascar Racing 2003 season: 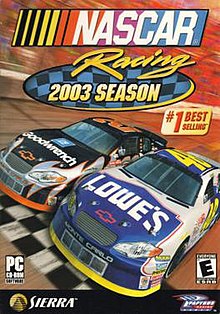 NASCAR Racing 2003 Season, or NR2003 for short, is a computer racing simulator released in February 2003 by Papyrus Design Group for Windows and Mac OS X. The game was the last to be released by the company before EA Sports bought the NASCAR license exclusively from 2004 to 2009 (parent company Sierra's successor company, Activision Blizzard, reacquired NASCAR rights in 2011, with NASCAR The Game: 2011). The game included all of the 2003 NASCAR season tracks and many of the drivers, including Dav...

NASCAR driving superstars Dale Earnhardt Jr. and Martin Truex Jr. are known to be players of the game, and many professional drivers are said to use the games online multiplayer mode to practice tracks before races. These included 2006 Rookie of the Year Denny Hamlin, who trained for the Pocono 500 at Pocono Raceway, going on to win the race at a track notoriously tough for rookies. (It should be noted, however, that Dale Jr. is a paid endorser for EA Sports.)
–

From one sim-racing addict to another… nice rig

If you’re looking for some team-based competition in a good number of the above-listed sims, head on over to www.vmaxsr.com and give us a buzz

Rfactor 0wns me! From the moment I hopped into the BMW F1 car and my “head” started being jerked around by acceleration and pummeled by the wind, I knew I was onto something special. Bought it straight away.

Dirt seems to be the odd one out of the list - Played the demo on 360, and thought it was a decidedly un-physicsy sim?

I’d love to get force feedback working in rFactor with the 360 wheel… haven’t looked into it for 6 months, but it didn’t look doable yet back then…

I need to make one of these for a FPS :S

My sim setup is a little … different